Art On The Rocks at The Art League

Art On the Rocks is an awesome fundraiser for the Art League in Alexandria, Virginia!
Three hundred tickets were sold for $35 each, winning the holder a vote for best cocktail and seven mini cocktails as well as hoes d'oervres. Yum!
Participating bars included Chadwick's, Red Rocks, Lighthorse, Virtue, Columbia Firehouse, Union Street Public House and the Bar at Bastille.
The drinks and snacks were generous and delish. If you missed it tonight, you can catch the next one in October.
Your imaginary friend,
Patsie 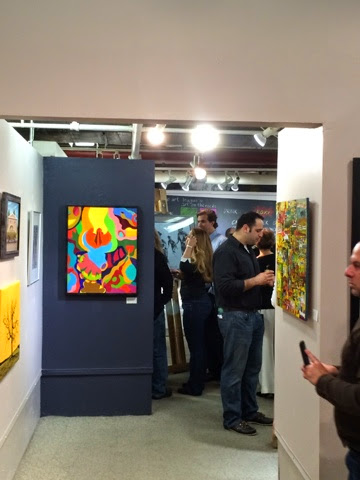 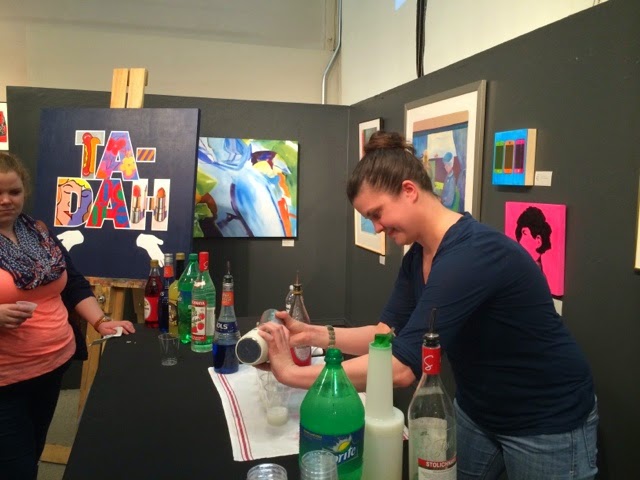 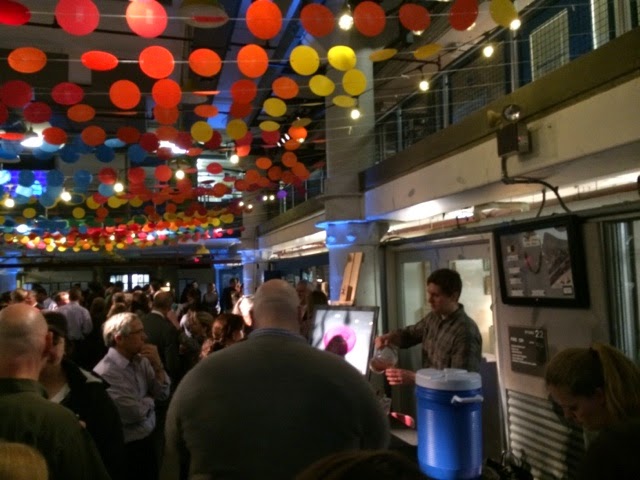 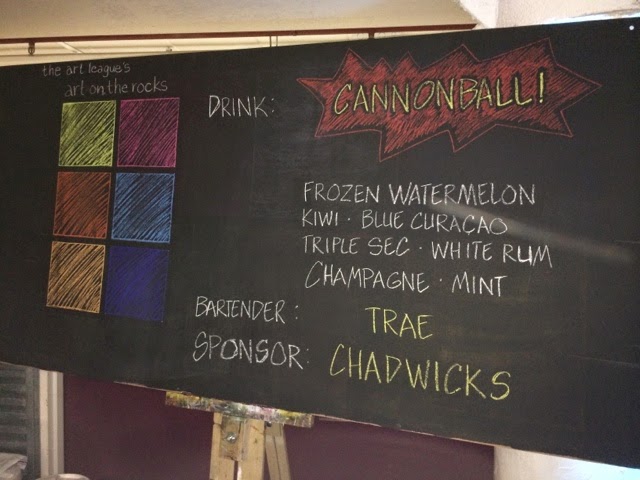 Posted by Patricia Uchello at 7:30 PM No comments: 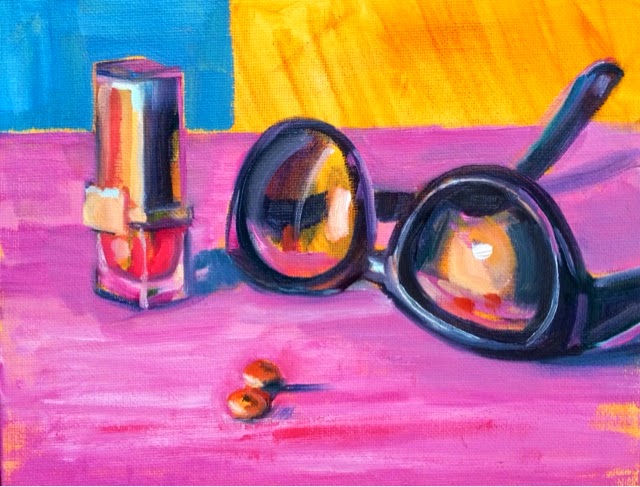 Posted by Patricia Uchello at 5:04 PM No comments: 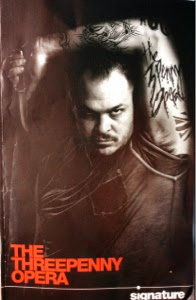 Dear Girls and Boys,
if you have the chance to get to Arlington, Virginia, in the next two weeks, please visit Signature Theater and get tickets to see the Bertholdt Brecht classic "Three Penny Opera."
The first song will blow your hair back. Delivered by the sultry actress playing Jenny, the hapless, mistreated prostitute, the song "Mack the Knife" assumes a new slow and deep lovely pace.
The play features two absolutely fabulous performances: the afore-mentioned Jenny and Macheath, aka, Mack the Knife.
His frenetic movements bring dynamism to every scene, which provide counterpoint to Jenny's frozen expression of sorrow.
The contrast is considerable.
The stage set is amazing as well, with a hydraulic jail that comes and goes.
The singing chops of the cast cannot be topped, including those of Polly, Mack's wife.
The men in the audience enjoyed the provocative underwear--the prostitutes don't seem to ever put on anything new except for spike shoes.
Rated R+. :)
By the way, the action is set in the near future with Prince William's coronation in London, although the original was written in Germany in 1940.
Your theater enthusiast,
Patsie
Posted by Patricia Uchello at 9:16 PM No comments:


If you have ever been to Greece, perhaps you have seen many blue painted window shutters and doors. They say that Greece has the bluest water in the world, and I am inclined to believe it, having cruised  through the Greek Isles last Fall.  What is Greece all about? Color and colorful people. This painting brings back happy memories of a slow pace of life and my enjoyment thereof.
"Athens, Greece", 8 x 8". Oil. For sale.

Posted by Patricia Uchello at 2:41 PM No comments:


What is a better signifier of Spring than yellow and light green in the landscape? I am a big fan of daffodils, which chase away the winter blues.
"Bucket of Apples". 8 x 10", Oil. For sale. 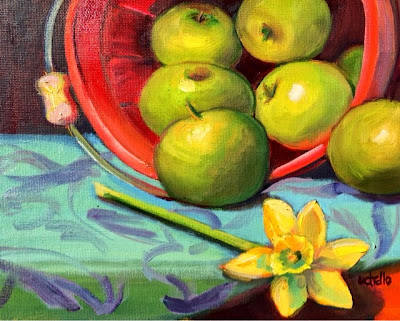 Posted by Patricia Uchello at 2:34 PM No comments:

In The Plains,  there is a charming Italian restaurant named Girasole, Italian for sunflower. 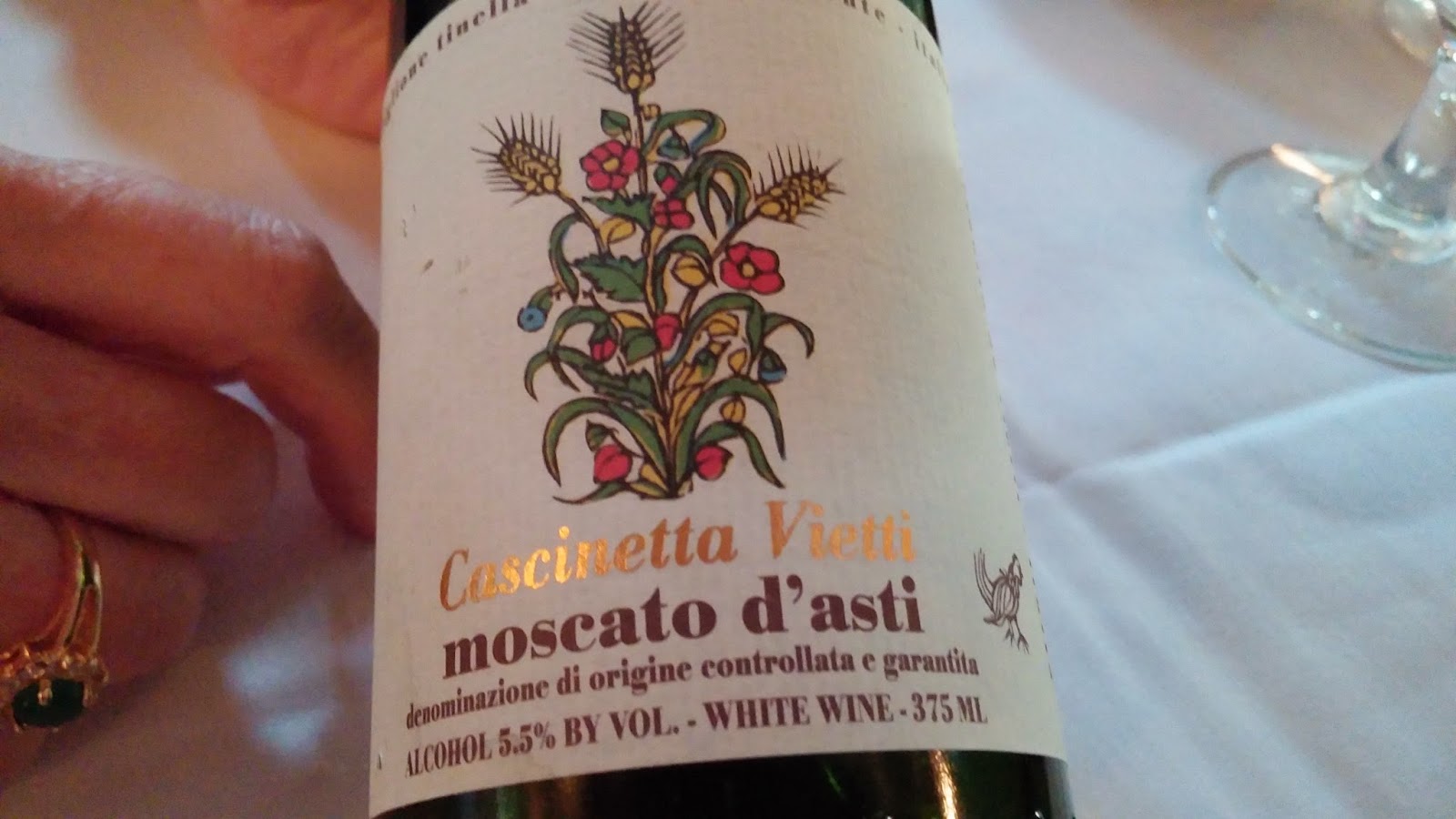 And if you are a fan of sweet and light moscato, this is the one for you!

The Plains is a charming mini-village, complete with two stores, no traffic lights, and two restaurants. It is not unusual to hear about Robert Duvall, known simply as Bobby, as having been through his home there recently.

The Plains has many farms, vineyards, and wealth, not in that order.
Rolls-Royces? Check.
Gold Cup races and polo? Check.
Huge properties? Check.

So check it out! It sits at the foot of the Blue Ridge Mountains and Rt 66 in Northern Virginia's exurb horse country.

Posted by Patricia Uchello at 7:13 PM No comments: