I have readers in about one hundred countries. (I know!!!)
Who knew it would be popular? Certainly not me. My readers are not just American, but also French, German, Canadian, and many different tiny countries everywhere, as well as not so tiny countries such as Russia. I guess we have something in common: a love of family, art, travel and food!

SO here is a big thank you to all my many readers, and may you live long and prosper! All ten thousand of you!

Kind regards,
Your Imaginary Friend,
Patsie, resident of the global village
Posted by Patricia Uchello at 9:00 PM No comments:

Photo Op From the Newseum 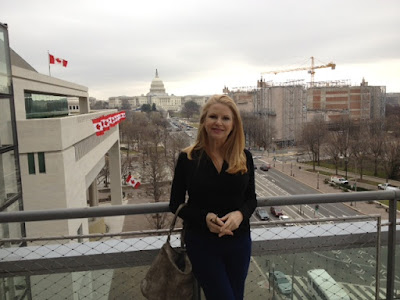 The Newseum, being seven stories tall, has  a great view from the top floor of our lovely U. S. Capitol Building. What a great photo op! To the left rear is the Canadian Embassy and to the right is the East Wing of the National Gallery of Art, currently under renovation.

Posted by Patricia Uchello at 12:20 PM No comments:

Civilization (All You Can Eat)

Last night, we attended a thought provoking, if strange play entitled, Civilization (All You Can Eat).
It was written by Jason Grote, a German-American with great stage credits; he currently writes the new TV show named Smash.

Grote's play features all of the following:
A large hog who ends up eating a vegan!
A ballet done with shopping carts from the supermarket!
A runaway and her ne'er do well mother, family relationships, excursions into the meaning of life, consumerism, capitalism, adultery, theater, advertisements, religion, Twix candy bars, processed food, Facebook, President Obama, race relationships, etc.
The magic happens when Grote ties all these threads together at the end.

The play is produced by Woolly Mammoth, a local Washington, DC, theater with some of the most daring productions in town. If you are looking for the umpteenth production of Hamlet, don't come here!

Posted by Patricia Uchello at 1:32 PM No comments:

The Unibomber at the Newseum

What a scary guy: The Unibomber held the public's attention for years on end. In the FBI exhibit of the Newseum, you can find lots of amazing exhibits such as this one, and news items regarding Patty Hearst, John Dillinger, the Lindbergh baby kidnapping, pictures of Pretty Boy Floyd, Al Capone, Baby Face Nelson, etc.
I wonder how the Newseum acquired such an extensive collection of artifacts... It is worth your time.

Your Imaginary Friend,
Patsie
Posted by Patricia Uchello at 12:29 AM No comments:

The Berlin Wall in Washington's Newseum

Posted by Patricia Uchello at 7:34 PM No comments:

The Newseum in Washington, DC

There is a unique museum in Washington, DC, that has no connection to the more famous Smithsonian: The Newseum. 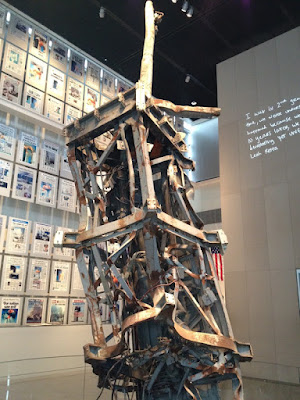 Did I just hear you say, prove it?
Well, OK. How about the above twisted antennae tower from the top of the 110- story- World Trade Tower, of the infamous 9/11?
Not something one sees everywhere.
Or how about the equally infamous Watergate door? 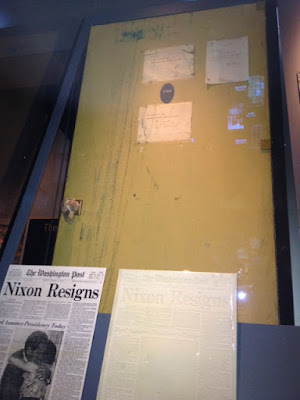 The night watchman was making his rounds and noticed that the door lock was taped open. Afterwards, he investigated further and found evidence of the burglary from the National Democratic Headquarters in the Watergate building. This was the undoing of president Richard Nixon.
If you look down at the bottom of the door, you will see the headline, "Nixon Resigns."

This huge seven-story museum is an amalgamation of history, pop culture, and journalism. It also has an excellent cafeteria run by the Wolfgang Puck group.

You really should visit the Newseum on Pennsylvania Avenue. It has a treasure trove of objects: Guttenberg's bible- a real page; the newspapers in which the bill of rights were first published, et al.
Amazing.

Your Imaginary Friend,
Patsie
Posted by Patricia Uchello at 7:18 PM No comments:

The Patrons Show at the Art League 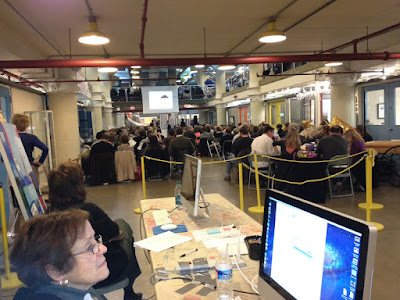 What a great time was had by all at the annual Patrons Show hosted by the Art League!!
Everyone who bought a $175 ticket went home with an original piece of art. Anticipation hung in the air as people waited to have their names and numbers called so they could pick their favorite piece. The last name called won a great consolation prize of a night at the Hotel Monaco and other freebies.
SO who's complaining? Nobody!
Come and join in next February!

Your imaginary friend,
Patsie
Posted by Patricia Uchello at 9:16 PM No comments:

Throw Me Something, Mister! 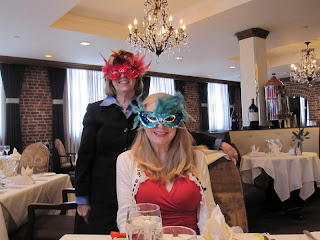 When I was a wee lass in New Orleans, I would ask my daddy to take me to all the Mardi Gras parades that he could stand. It was so much fun, watching the trumpeting marching bands sashay in rhythm, catching beads and doubloons from the floats. The sights and sounds were incredible. There were day parades in the innocence of sunlight and candlelit parades at night. It all went down in New Orleans, where there is an eagerness to celebrate anything, including the last day before the Catholic season called Lent.

Lent is a grim time when one is supposed to give up favorite foods and drinks, ahem, and behave. So to make up for lost time, in advance of the 40 days and nights of deprivation, the revelers mask and costume,  pretending they are someone else. This is a liberating notion, to carry on and act up while in disguise as a Hostess Twinkie, or Whistler's Mother. Whatever! Nobody has to know who you are, so it is a popular concept. The krewes of Mardi Gras always wear satin costumes and masks.

If I were to costume and parade around Alexandria, Virginia tomorrow, people might stare at me quizzically, frowning. But I guarantee that if I were magically back in New Orleans tomorrow, I would not merit a second glance.
As the French settlers declared back in the 1800's, Laisssez Les Bon Temps Rouler!
Let the good times roll, cher.

Posted by Patricia Uchello at 6:09 PM No comments:

Posted by Patricia Uchello at 10:50 AM No comments:

Today from 4PM til whenever is the Art League's one and only major fundraiser of the year: The Patrons Show.
For more details check outtheartleague.org
This is a fabulous fun event and we expect 700 or so to attend today at the Torpedo Factory.
There might be a few tickets left!

See you there,
Patsie
Posted by Patricia Uchello at 10:47 AM No comments:

I am so excited, because my art studio was featured today in a blog about small spaces, and do it yourself design. Please check out yours truly in http://diydelray.com/

Diydelray.com is devoted to small space living, inspired by the charming if not altogether spacious homes of Del Ray. Del Ray is just north of Old Town Alexandria, and possesses many craftsman style bungalows. It is an artsy neighborhood with many of my favorite places, such as A Show of Hands shop, ashowofhands.biz, Tacqueria Poblano, Los Tios, Kiskadee, The Dairy Godmother, ACKC, Cheestique, etc.

Although I live in a different part of Alexandria, my studio is a tad tight and could just as easily be a bedroom in Del Ray.
Somehow,  the limited space works.
Check out the article and you will see why.

Your Imaginary Friend,
Patsie
Posted by Patricia Uchello at 9:04 PM No comments:

Happy Valentine's day from me and Andy Warhol.
Your Imaginary Friend,
Patsie
Posted by Patricia Uchello at 1:49 PM No comments:

A Show of Hands: Where to Buy That One-Of-A-Kind Valentine's Gift 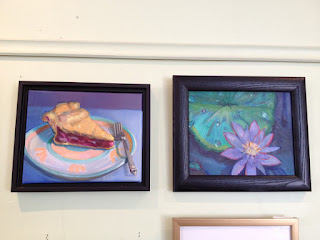 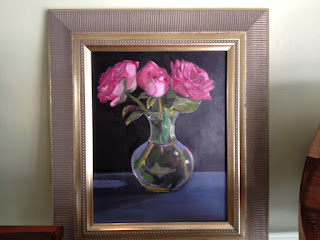 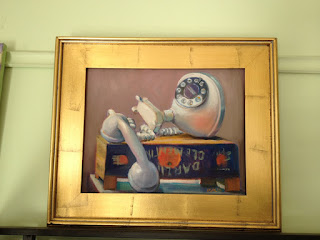 At A Show of Hands, one of a kind gifts are available, for Valentine's Day, for birthdays or for yourself. (Hey, you deserve it!)
Also stocked -- besides paintings and crafts -- are knitware, baby items, and lots of handmade jewelry.
Check it out, on Mt. Vernon Avenue in Del Ray.A Show of Hands
Posted by Patricia Uchello at 5:47 PM No comments: